So living in a small town has its positives and negatives.


One is very apparent. Most everyone knows who we we and where we live. There are only about 30 Americans living in the town of Gracias and 10 of us live on the same street. Needless to say we are watched whether we like it or not.

A few days before we left for our Independence day vacation, we had spoken to our neighbor, Norma, who was watching Esperanza for the weekend. Norma had kindly warned us that we should not leave valuables in our house for our long weekend away because people know that we will most likely be traveling. She told to us about a similar situation last year that the Minerva teachers had their house broken into on the same weekend and we just needed to be aware.
The morning we left for Lake Yojoa, I put my computer under my pillow, stashed my money in a pocket of a pair of pants and put my phone in my makeup bag. It didn't even cross my mind that 24 hours from that moment someone would be going through my room looking for stuff.
The next day our neighbor Norma came over around 6 a.m. to feed Esperanza and found the entire upstairs part of the house open. All doors and 2 windows were wide open. She immediately called Julie, an American teacher that has been here for 3 years, to tell her what happened. From there our landlord, owner of our school and Julie's friend came over to find out what was and was not taken from the house. They found my computer under my pillow and my phone still in my makeup bag. I decided not to tell them where my money was because I didn't want them rifling through my clothes in an attempt to find my money. If the robber wasn't smart enough to look under my pillow, I highly doubt he was smart enough to rummage through all of my pants pockets to find money.

So we spent our vacation not worrying about it since nothing major had been taken.


When we got back, we discovered that my roommate, Kristin's blackberry phone, camera and 300 lempiras($15) were missing.
Unfortunately for us people don't utilize common sense around here. When we got back from our trip, we found 2 out of the 4 bedroom doors locked. The problem with this strategy is that none of us have keys to unlock the bedroom doors. So as you can imagine we have come home to our house that has been robbed and to add salt to the wound 2 of the girls can't even get into their bedrooms. I was lucky that they didn't lock my bedroom, but they left my phone and a few of my plugs laying on my bed. So if the robber had come back, he would have been treated to a brand new Droid phone.


So at this point my roommates have to break into their own rooms. Two screens and a broken door handle later, my roommates were finally able to get into their rooms. We were all finally able to assess our rooms and it was clear to us that the robber seemed to only go through our underwear and folded clothes drawers. Bringing us to the conclusion, he was just looking for money.
My roommates and I sat around and ate pizza that night chatting about who could have done it. It obviously had to be someone we knew. But as we racked our brains we just couldn't pin point who it was. We gave up thinking we were going to figure it out because one can go crazy contemplating all the possibilities.
A few days later we were presented with some interesting news.
Norma came over and asked if we were missing a camera. Apparently, she had not been informed that a camera had been stolen. She told us that our neighbor, Tortilla lady, (we call her tortilla lady because she makes and sells tortillas), had come over to her house and had tried selling a camera to Norma's son. So Norma's son looked at the camera and then the pictures and realized that there were pictures of white girls on the camera. He immediately knew it belonged to one of us. So he acted interested in buying the camera and had managed to take a picture of the camera with his phone. He told tortilla lady he would think about it and possibly buy it later. He went to his mom and told her what had happened.
So when Norma came over, she showed us the picture of the camera and sure enough it was Kristin's camera. We were flabbergasted. How the heck did Tortilla lady get our camera? Norma told us that she was pretty sure that Tortilla lady's 15 year old son broke into our house and that it is less obvious if she is selling a nice camera rather than her son, who apparently has a reputation of stealing. The crazy thing is they live one house away from us. So the minute we moved in he has probably been scheming.


Norma's plan was to have Tortilla lady come back over with the camera to sell to her son and then she would inform her that we have cameras in our house (hahaha, which we don't, but they don't know that), that we know her son broke into our house and that we were going to go to the police.


As expected when Tortilla lady was informed that we knew, she crumbled and apologized profusely to Norma. She begged that we didn't go to the police because her husband would beat her son for robbing us. So we decided to give him a chance to come over, apologize and return Kristin's things. If he did this than we wouldn't go to the police. Unfortunately, he never came and apologized. We did get Kristin's camera and phone back though.


We are still in limbo about what to do about him. I suggested he come over to our house and do community service for us to pay of his debt. But he has been hiding in his house with his tail between his legs.


The thing that bothers us the most, is that his mom, Tortilla lady, was involved. We used to buy tortillas from her about twice a week. She even taught us how to make them. So the fact that she had the audacity to say she didn't know that the camera came from our house is the most insulting part of the whole scenario.


So 3 things I learned: 1. Never hide anything valuable in your underwear drawer. That is the first place they look. 2. Most crimes are not random. 3. There are good people in this world, who have your back, no matter what!


Our neighbor Norma and her son showed our house the true meaning of friendship and what it means to be a good neighbor. 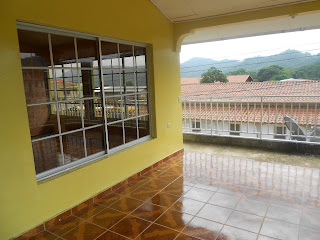 This was the window that he went through. GGGRRRRRR