I was blessed with the chance to go home for Christmas. Two weeks back in the States was great. I got a much needed refresher. But all good things come to an end. So at the end of 2 weeks it was back to Honduras for my last 6 months.


I should have known that getting back to Gracias wasn't going to be any easy task. But I never expected it to go in the direction it did.


Saturday morning obviously came too fast. I left A.J at the entrance to security in such a fog. I had such a long travel day ahead of me that the idea of leaving him didn't really hit me at that moment.


However, I got on the plane and right as we took off, the sadness hit me. I became "that girl" sobbing on the plane. Luckily I had the window seat and just looked out as we took off. But I literally couldn't control the crying until I started to smell something. I glance over and the girl on the aisle is throwing up. So the woman in the middle of us is sandwiched between a cryer and a vomiter. That was enough to pull me out of my sadness.


Good thing I was 20 minutes into my 12 hour trip home and it was starting just how I imagined it, interesting!


I got to Houston, grabbed my last Starbucks and met Jenna and Kristin for our plane ride to San Pedro Sula
Adios U.S., hello Honduras.... or so we thought


10 minutes before we were supposed to land, the pilot comes on the loud speaker and informs us that a plane has broken down on the runway (there is only one runway) so we will circle the area for 15 minutes, if the plane isn't moved we will have to fly to El Salvador to  refuel.


Yep, you guessed it, we had to fly to El Salvador for gas. We end up sitting on the plane in El Salvador for 2 hours waiting for word on the runway situation in Honduras. Good thing it was 85 degrees outside and our plane was sitting in the El Salvadorian sun, roasting.


Jenna, Kristin and I are unfortunately not sitting together. So we are talking over rows about the rest of our travels to Gracias. Since we are in the middle of coffee season, buses are more likely to get robbed because people are carrying more cash. We have been warned to stay off the 4 o'clock bus back to Gracias because it has been consistently been getting robbed.


So Jenna and her seat neighbor start chatting and she realizes they are going to Santa Rosa Copan, town 45 km from Gracias for some missionary work. They offer to help us once we get our luggage and speak to their contact in Honduras.


Well God was watching over us that day because the cutest nun I have ever seen, inquires about our situation. Once she realizes we are stranded here in San Pedro Sula, she is ademant about helping us. No matter what it took she said she wanted to help us.


After chatting with this missionary group for a while, they inform us there is enough room in their van for the three of us.


They even bough us dinner on our way to Santa Rosa Copan. This group of Catholic missionaries took us in and helped us out even more than we could have ever asked for. It was an amazing jester of humanity.


They did offer to give us a room in the orphanage where they were working, but it had been a long day. We needed to relax. 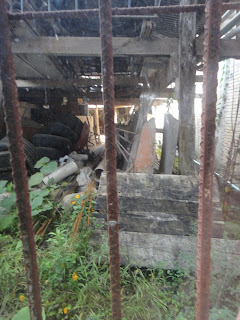 View from the room. Hey beggers can't be choosers. 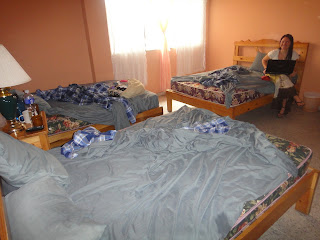 Our room.
The next morning we took a taxi to the bus stop.
Lesson learned that day: be aware of YOUR bag at all times.
As we approach the bus terminal our taxi is surrounded by about 5-8 men yelling for us for different destinations. The taxi driver tells them we are going to Gracias, but half of them are still not listening.
We get out of the taxi and these men won't leave us alone. They are insistent we get on their bus, even though it isn't going where we want to go.
It then becomes almost like a tug-a-war with our bags. One guy takes off with two of our backpacks. He crosses the street, headed for who knows where!!
I am sprinting after him, dodging cars and yelling to bring our bags back. He finally turns around looks at me as if I have messed up his plan of putting my luggage on another bus.
I escort those backpacks onto a different bus and then panic sets in with Jenna. Where is her roller bag? I looked at her and told her I had not clue. My goal was to stay with MY backpack. I wasn't watching her bag. She sprints across the street and stands in front of th,e bus that she believes her bag has been put on.
I was thinking her bag was a gonner!! But in true Jenna fashion she stops the bus, and gets her bag,while causing a huge scene. But she got her bag back, that's was most important part of it. We all just sit down and look at each other with this huge sigh of relief. But Jenna then decides to run and get some food, in which the bus almost leaves without her.
We spent the next 45 minutes shaking out heads. We couldn't believe how the last day had played out.
We finally gotten home. 32 hours after I had left San Antonio, I was finally able to set my bag down on my bed. What a relief that was!
It was great to be back to throwing toilet paper in the trash, walking everywhere, cooking without a light in the kitchen, cat calls from every Honduran man in the street and the sound of roosters and dogs barking at all hours of the night.
Ahhhhh the life in Honduras. 21 more weeks :)
Posted by Ms. Kate Seeley at 4:50 AM