There are times in your life when it is necessary to follow the saying: Do it now, ask questions later. I would like to say at 28 years old, I would have matured out of this, but I haven't.

So an opportunity arose to have a bit of a long weekend. We had a half day on Friday because half of our school moved to a new location. Unfortunately I am stuck in our old school, but the perk of that is, I didn't have to re-decorate a new classroom. So Kristin, Jenna and I decide since we are not moving to the new school, why not take advantage of a half day.
Now let me preface we were not given the rest of the day off, nor were we told we had to stay.
The little rebels we are, decided once the bell rang at 12:00 we were hopping on the first bus out of Gracias.


We  figured we would get to Nuevo Ocetepeque about 10 min from the El Salvador/Honduran border. We would spend the night and then get into La Palma the next morning. But luck was on our side. Even with the 45 traffic jam we got stuck in, we made it to Nuevo Ocetepeque with plenty of time to cross the border and get to La Palma before dark.


And of course there is always a but... when it comes to life here in Honduras.


Our taxi driver drove us to the border. As usual you hand over your passport, they stamp it and your on your way. Honduran immigration, check. El Salvador border...


We hand over our passport to the El Salvadorian immigration and we start to play the "why is this taking so long?" game. As everyone immigration officer is brought over to look at our passports, we ask them if there is a problem. But we weren't getting a lot out of them.


Until we are led to a back room and asked to take a seat. It is never a good thing  when they ask you to sit down! They asked us if we have left the C-4. These are the countries El Salvador, Honduras, Guatemala and Nicaragua. According to El Salvador you must leave the C-4 every 90 days to receive a new visa. But according to Honduras that law doesn't exist any more.


So when the El Salvadorian immigration looked at our passports they did not recognize any of our visas. Let's be honest it is because our visas that we receive from our school are bogus. The owner of our school sends our passports to Tegucigalpa where her lawyer pays off someone to stamp them. I know, I know, I know what you are all thinking, we are crazy for allowing this to happen. But it hadn't affected me till this exact moment, so I hadn't put much thought into it.


The saving grace was our trip to the U.S. This cleared our fake visas and allowed us a new one starting the day we flew back in January. But El Salvador wanted our plane ticket, which had been confiscated by the Honduran immigration. So they told us to go back and get our plane tickets.


So we walked back over the border and asked for our plane tickets. The immigration officer clearly had a chip on his shoulder and didn't want to give us our plane tickets. After a few minutes of debate, he reluctantly gave us our tickets, but he lectured us on bringing them back.


Back over the border we went with our plane tickets. We finally got the okay from the El Salvadorian immigration to pass. FINALLY!!!


We got into our taxi and heaved a big sigh of relief. Did that just really happen?? Oh man, an hour later and almost a $150 fine, we were in El Salvador. I think we were all glad it was only a 30 minute ride to La Palma.


A few Pilsners, a delicious dinner and we were 3 happy campers. 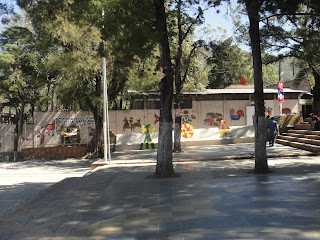 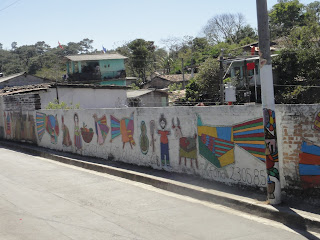 There is artwork every where you look. It is amazing. 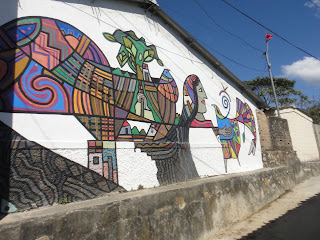 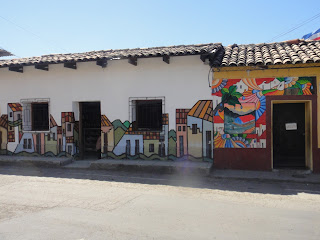 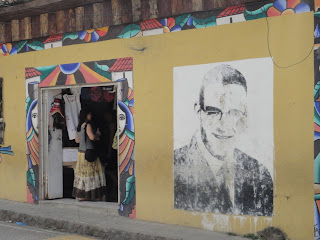 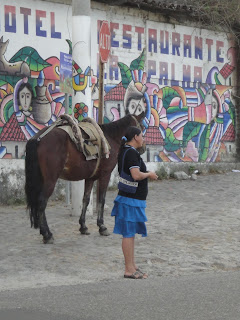 Couldn't resist this picture, it is so Central America. 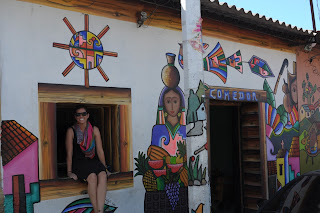 Cute little Comedora we ate at. 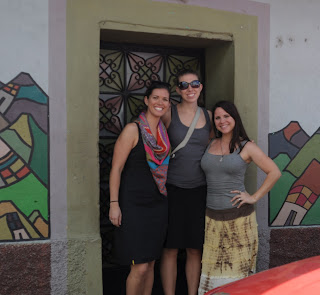 Kristin, Jenna and myself.
After a nice day walking around Saturday, we enjoyed some delicious Pupusas, a staple food in El Salvador, for dinner.
Unfortunately, Sunday proved to be drama filled, once we got to the border.
We smoothly got through the El Salvador border. But we were a little nervous going back to the Honduras border because they had specifically told us to bring back our plane tickets. El Salvador told us to keep them because they belonged to us. So since we were in El Salvador we decided to keep our plane tickets and then deal with it when we crossed over to Honduras again.
We walked up to the immigration office and we were a bit relieved because we didn't see the same immigration officer, until the door swings open and out he comes. He was throwing balls of fire at as. Literally screaming at us at the top of his lungs, that we did not bring back our airplane tickets. Kristin speaks really good Spanish so she was yelling back at him. It was like watching a Telanovella on a tennis court. It was insane. Of course I decided to throw my two cents in and tell him to calm down. I am pretty sure that only enraged him even more.
The ironic thing about the situation was that he was wearing an "I love you" lanyard and standing right next to the sign that said "No Yelling". In the midst of all this madness, I seemed to giggle at the scene.
Anyway, he finally calmed down and stamped our passports. It wouldn't have been a trip across the border without the drama.
Lesson learned: sometimes you can't even trust your boss.