Day 74: Try duck pizza
Oh goodness it was probably the most awful thing I have tasted in a long time. Don't ask me how we made the mistake of not realizing how strange it might be. But when Gretchen tasted it, she said it tasted like 'jello'. I knew I wasn't imagining the awful texture in my mouth. It was confirmed.

Day 75: Teach Radi and Magdiel the words to "Wild Ones" by Flo Rida
http://youtu.be/bpOR_HuHRNs

We stopped and rewound the song more than enough times, but the best part came when they said "Oh wow it says Wild Ones".... yes it does! I love learning a new language and watching others do it as well.

Day 76: Play secret Santa with my family, Magdiel and Radi.
We decided to play secret Santa or amigo secreto, since this was our first Christmas with non-family members. So we pulled names and then each giggled and akwardly looked around, not wanting to give away our person.
But my dad immediately pulls me aside and asks, "What does Magdiel want?"  well, that secret was ruined. Then as my dad walks out of the room, my mom points to my dad and whispers, "I have dad.". Oh jeez, so much for secret Santa. I was hoping the boys could keep their secrets better than my parents.
So Magdiel, Radi and I head out for the mall, as we were driving, they asked me to tell them 4 things my mom, dad and myself would want for Christmas. So I start with my dad and Magdiel is acting like he has my dad, when I know perfectly well my mom has him. Then I begin to say what my mom would want and I mention lotion. Radi then chimes in "What smell does your mom like?" hahaha oh really Radi, who might your secret Santa be? I tell him she loves Gardenia. But lost in translation, he thinks I say Gardening. Oh English language learners.
When we arrive at the mall, we go our separate ways, but I knew I was bound to run into the boys sooner or later. Unfortunately, I was buying Magdiel's present for my dad and as I rounded the corner in Aldo I almost run right into Magdiel. I instantly knew he had me for secret Santa (he was looking at women's shoes). He just looks at me with desperation and says, "Help me, you are such a difficult woman." So eloquently put my love.
I won't go into the details, but 4 stores and countless back and forth's later, he decided on a gift for me. I wish I wasn't so picky, but I told him, would you rather your gift go in the back of the closet? Or would you rather me actually like it?
Point taken.

Day 77: Learn how to make Pan de Pan
This is a traditional Honduran dessert that Magdiel and his family make each year during Christmas. So Magdiel wanted to share one of his family traditions with us.
So Magdiel, Radi and I went to the grocery store and immediately I am curious about the recipe, it called for 2 cups of vanilla extract..... what? 2 cups?  How is this possible? But who am I to question. It is not my recipe.
Anyway our team effort, led the three of us to make the dessert together. Radi was in charge of carmelizing the sugar, I was in charge of mixing the bread and milk and Magdiel beat the eggs, sugar and vanilla together.
And yes there is almost 2 cups of vanilla extract in this recipe. It caused me a bit of confusion when Magdiel said 2 cups, but who am I to question Magdiel on how to make a traditional Honduran dessert. But don't get me wrong, I definitely questioned it. Oh man, was it was delicious!! 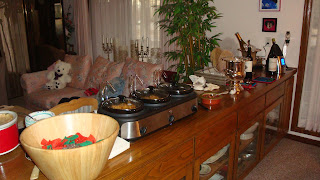 The posole ready to be eaten. 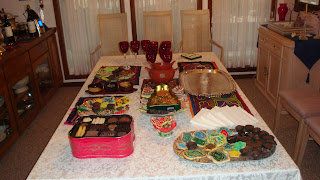 Magdiel, Radi and I hanging out before the party. 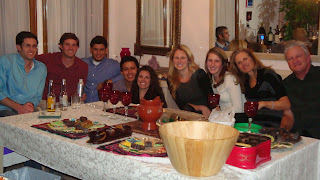 One of my favorite families, the Cloaks, who came over to celebrate with us. 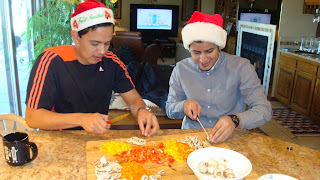 The boys chopping vegetables for the omelets. 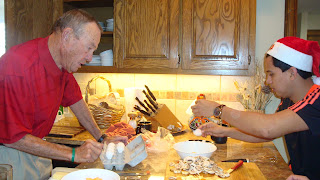 My dad and Magdiel working together. 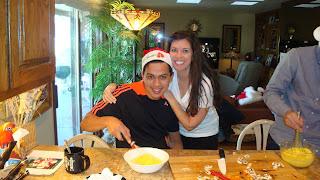 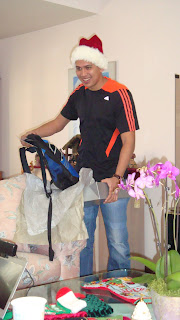 Magdiel got a backpack from his secret Santa. 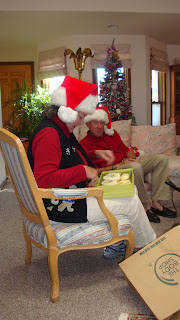 My mom got lotion, Gardenia 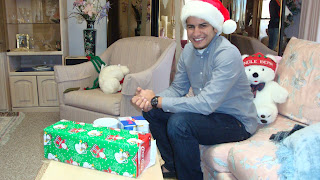 Radi got Coke and Red Bull from his secret Santa, hahaha his favorite. 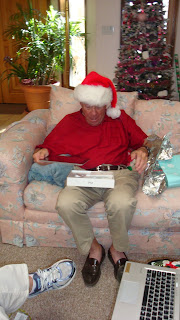 My dad got an ipad!! 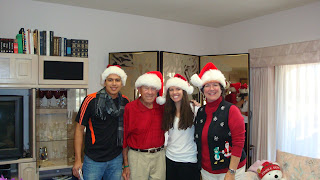 Fun times with my family, Magdiel and Radi for Christmas

Day 80: Jumping pictures at 10,378 feet
It was a staple move that Kristin and I did in Central America, but we never did it on top of a mountain... Here was my chance.
So I decided to take the boys up the Sandia Tramway, the longest tramway in the world. 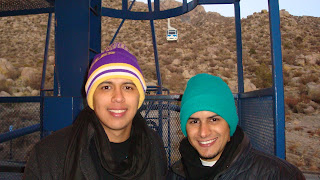 Just about to head up the mountain. 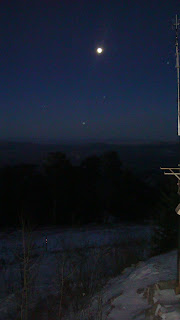 The other side of Sandia, with the moon and the snow. So beautiful. 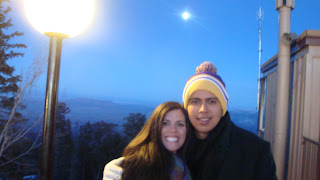 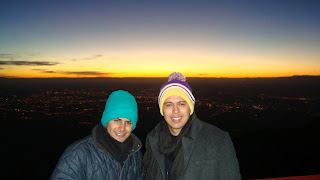 Radi and Magdiel catching the last bit of the sunset at 10,378 feet. 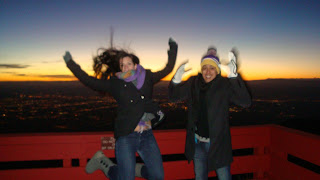 Look at the view!! Magnificent 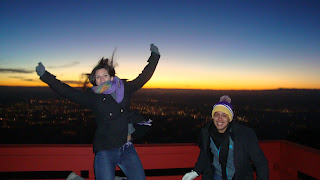 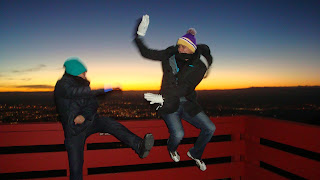 Radi and Magdiel jumping at each other. 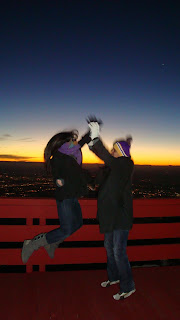 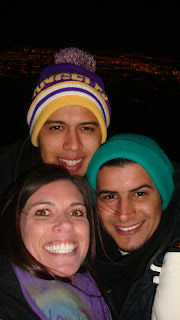 Last picture on the mountain! Good-bye wind and freezing temperatures.