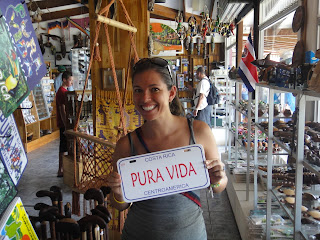 Life in Costa Rica is much different than life in the other Central American countries. It is much more developed and Americanized. I knew it was going to be different, but I still found myself gawking at the nice houses, expensive American cars and over all development of the country.


Our first stop was La Fortuna. It is a town located next to Arenal Volcano, which is normally an active volcano, but it has been dormant for the last 10 months. 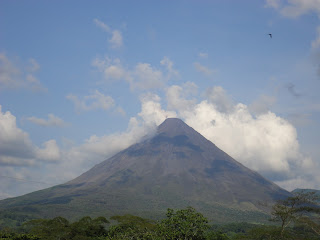 Volcan Arenal
So in the words of most Americans "Go big or go home", we decided to take that approach on our adventures in La Fortuna. Our day was going to consist of a waterfall/crater lagoon hike in the morning, a swim in a watering hole, eat lunch, hike the lava beds at the base of the volcano, go swimming in hot springs and complete the night with dinner and a delicious rum drink... I wasn't joking with the "Go big or go home"!!

Let the day of madness begin. First up, waterfall hike. 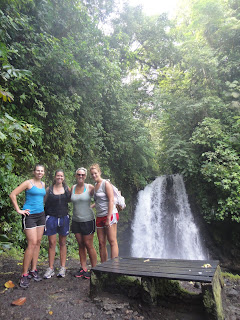 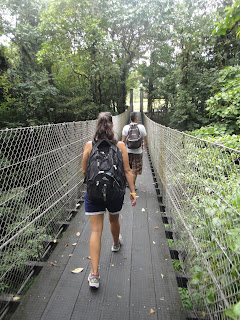 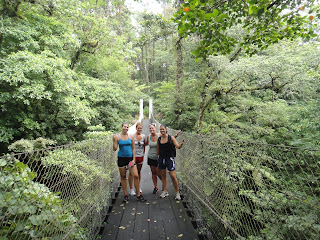 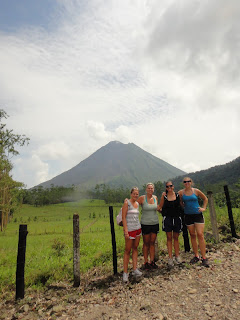 Headed up to the crater lake. Volcano Arenal in the background. 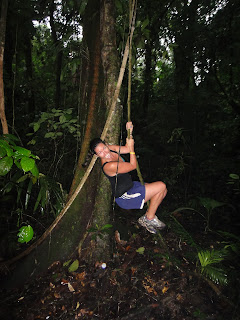 Hanging from a vine. I felt very Tarzan inspired being in the rainforest. 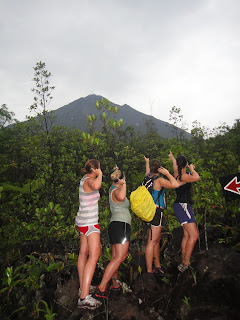 Our day of fun was great. We were exhausted, but the next day, Kristin and I were headed to Tortugero. The most popular beach in the Western hemisphere, for sea turtles to lay their eggs. We were both so excited but getting there was a bit of a hike....

3 buses, a taxi and a boat ride later, we were officially in Tortugero!!! 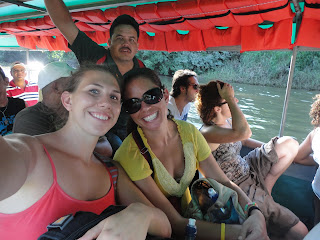 On the boat to Tortugero.


It was a bit of an interesting day, but we made it. After sleeping the night away, we were up bright an early for our canoe ride through the canals to check out the rainforest. 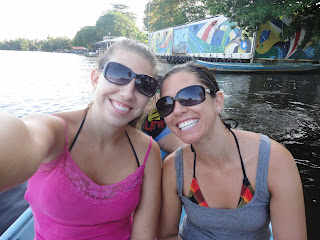 Our 6 a.m, canoe ride. We saw three species of monkeys: spider, white faced and howlers. We also saw crocodiles, 5 different species of heron, iguanas, butterflies, lizards and Cayman toucans. According to our tour guide, we were lucky ladies to see all those different animals. 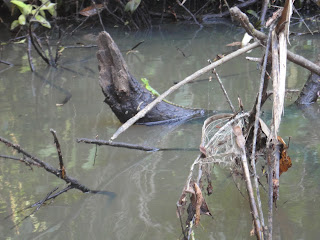 A little lizard we saw.

Our canoe ride was great. But let's be honest, Kristin and I were most excited to potentially see sea turtles laying their eggs. Fingers crossed we were going to see some :) 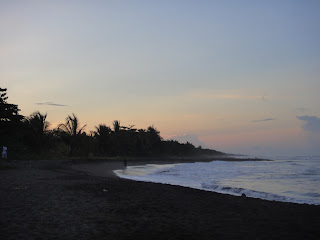 Sunset before checking out the sea turtles.

So that night we got on our "darkest outfits"... 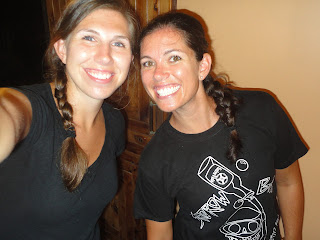 Yes, I am wearing a shirt with a skull drinking... No judging. It is the darkest shirt I own down here.
We headed out for an adventure of a lifetime. We weren't sure what to expect. We had heard that we could potentially see turtles, but since it wasn't peak season it was a crap shoot whether we would see some. So we left with fingers crossed.
We had the same tour guide, the one who said we were lucky girls. She kept insisting we were lucky girls and she hoped we had the same luck as the morning.
It was pitch black as we walked along the beach, stars shining above, and waves crashing around us. It was picturesque. It started to rain, which only added to the mysterious moment of walking on the beach in the pitch black, searching for these amazing creatures following their natural instinct.
All of a sudden, our guide tells us there is a turtle coming out of the ocean. Now let's be honest, it was dark, I mean very dark. At first, you think your eyes are playing tricks on you. Is it a huge log?  Or is that really a sea turtle. But as your eyes start to adjust you realize these gigantic dark figures are indeed sea turtles, slowly making their way up the beach. However, as we stood their, a group behind us came up quickly to observe her. But these large animals are incredibly sensitive to the vibrations on the beach. She became spooked and went back into the water. She sensed danger, which alerted a nearby turtle, who also turned back.

At this point, I wasn't thinking we were very lucky. 2 turtles.... 0 eggs layed.

But we continued on and found a hawksbill turtle who was in the middle of camouflaging her eggs under sand. She then made her way back to the ocean. This was neat to see but I was dying to see a turtle lay her eggs.
But luck was on our side. We found a green sea turtle, who was in the middle of laying her eggs. I got to watch her eggs drop into the hole she had dug. She layed 114 eggs, which is pretty average for a green sea turtle.


There was a conservation group there, which ended up tagging her and measuring her (she was close to 4.5 feet!!!!) to track her life and her potential babies.


I couldn't believe, I was so fortunate to watch her lay her eggs. An unbelievably moving moment to be sitting on a beach, bright stars above, the sound of waves crashing in the background and an endangered species laying her eggs.


It was phenomenal to watch. There aren't very many words to describe how amazing it was.

I am not sure how I am going to top that one!!! Kristin and I walked away just awestruck by the beauty we just captured. I would love to share pictures but no pictures are allowed, so hopefully my description paints the beauty that I saw. 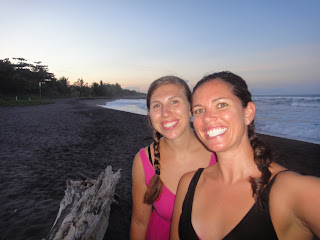 We left Tortugero happy campers. But our last stop in Costa Rica was Cahuita. 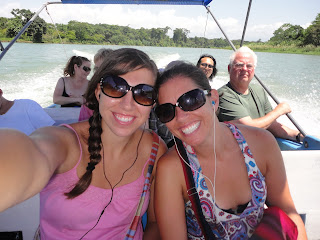 I will be perfectly honest, all we did in Cahuita was lay on the beach. It was nice to relax for a day! 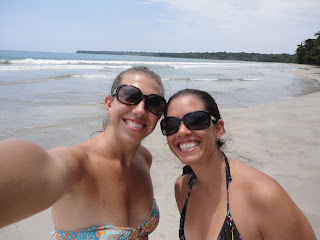 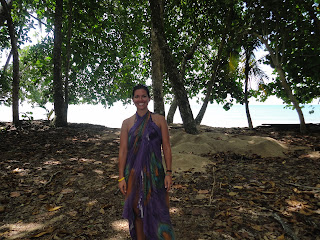 Standing in Cahuita National Park. Beautiful beach in the background.

Adios Costa Rica!! It was great, you were expensive, but beautiful. Panama here we come!!