So it is not really in my nature to help out someone on drugs (that I don't know). But this one kind of fell in my lap....literally.

Here I am minding my own business at the grocery store, when I notice this lady acting all crazy. She was displaying the typical signs of a person on drugs. But I just said to myself "keep walking'. A few isles later, I am reaching for a box of cereal when the sounds of tumbling cereal boxes alerts me to look up.....

Here comes tweaker right for me. Don't know if it was instinct or luck, but the box in my hand flies out and is replaced with this woman. I want to say at this moment she snapped out of her drug induced coma to say 'thank you' for catching her, but the moment passed before her arms are flailing and she is brushing herself off (like she fell on the ground, instead of into my arms).

I just stood there a little shocked. So my good deed may have gone unnoticed to her, but at least it all worked out.

Day 37: Tell a scammer off
Basically, I contacted a man about renting "his apartment" and he took me on the run around. Until he finally said, "Send me the money and I will send you the keys"....hahahahaha we have got a joker on our hands.

So I told him my two cents and his rebuttal "Are you on ruffies?"....

No, because if I was taking ruffies I would be passed out, not telling you off.

Day 38: Cheer on my students for their drum performance 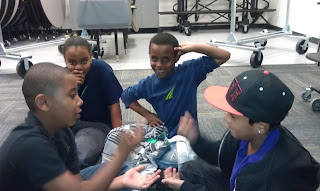 Playing rock-paper-scissors right before the performance. 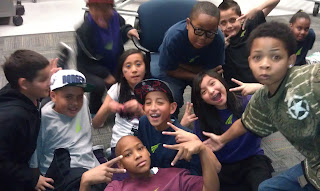 I bring out the camera and they are immediately ready to pose!

SPICY!!!! My lips were burning, but it was amazing!

Day 40: Eat a traditional Saudi Arabian dinner....with only my right hand
Assalam Alaikum" is a greeting between Muslims. It means "Peace be upon you".
It was a wonderful cultural experience and I am thankful to be friends with Radi, who teaches me new things about being Muslim. 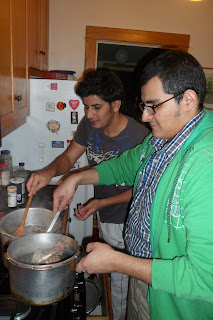 Radi and Sultan cooking the lamb they had slaughtered earlier in the week. 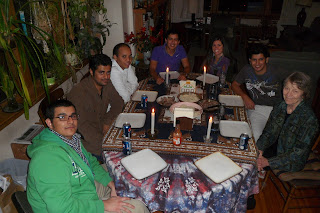 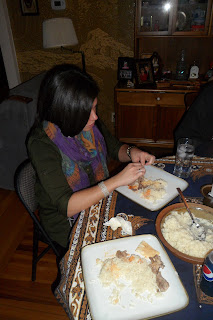 Eating with my fingers....but I had to pull apart with both hands. But I ate with just my right, in true Muslim form.


Day 41: Meet children's author Denise Vega and take a writing class from her.
She is most notably known for her book: 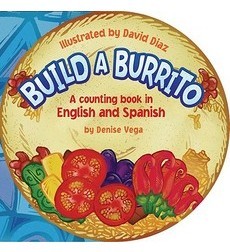 It was a wonderful class and I gained a lot of knowledge about writing my own children's book. Check out her website. She is very talented and has some great books aimed for preteen girls.

Day 42: Take Jaiden to the park and watch rockets launch.

Day 43: Donate to the Salvation Army holiday collectors.
Everyone walks by them on their way into the grocery store. They are ringing those obnoxious bells, occasionally saying something along the lines of "Happy Holidays" or "Merry Christmas". So I thew my change in the bucket, when I hear the man collecting money flat out asks me,
"Are you dating anyone?"
I was so caught off guard.
This is not a dating service to pick up women! It is a way to collect money for those less fortunate. I wish I had said this to him, but I was so caught off guard, all I could say was, "Yes" and walk off. That is the last time I smile and donate money to them!

Day 44: Visit Colorado Museum of Nature and Science to see Pompeii exhibit
I will sum up my experience: CRAZY
There were great artifacts, but I was thrown-up on twice (by my students) AND I lost a student for a few minutes. Ahhhh the life of a teacher on field trips.

Day 45: Carry bags for an older person.
Bless this sweet man's heart. He had too many bags for his own good. So I helped him load his bags into his car. He was very sweet and profusely thanked me.

Day 46: Say Happy Thanksgiving to as many people as I can in the airport.
Most people cordially said it back, but there were a few that looked at me like I had three heads or something. I only missed one person, which happened to be the first person I encountered. He was the parking garage attendant, who gave me some bad news. I was so busy telling him no worries, that I forgot to tell him, Happy Thanksgiving, until I started to drive off. So I leaned my head out the window and yelled it, but I am unsure if he heard me, the wind was blowing like 90 mph. But at the end of my time in the airport, it felt good to see all those smiles.

But the giving didn't stop there. I also lent my earphones to the girl sitting next to me on the airplane. She told me it was a sign I was sitting next to her. She made me smile with that.

Day 47: Handstand Challenge: Hold a handstand on the wall as long as I could: 2 minutes and 3 seconds. Pure agony for my shoulders and arms.
Posted by Ms. Kate Seeley at 8:06 PM