I have officially developed a love/hate relationship with dogs. It is so sad to think this, even write it, but it is a harsh reality living down here in Central America.
During my frequent trips into town, which are about a 15 minute walk, I see roughly 7-10 stray/homeless dogs. They are skinny and flea and tick infested (I only know they are infested because every few feet they stop to scratch). It is a sad sight and for the most part they leave people alone because let’s be honest people aren’t very nice to them.
I was told that if a dog is bothering you pick up a rock and pretend to throw it at them and they will run away. Dogs are used to people throwing rocks at them, kicking them and hitting them with cars. I know what you are thinking, it sounds horribly mean to pretend to throw a rock at them, but it saved me twice from getting bitten. There are some dogs, which are very territorial and have lunged at me to bite me while on my evening runs. So as you can imagine I run carrying a rock now.
Now to the love part…
My roommates and I came home one day and found in our yard a tiny emaciated puppy, which was on the verge of dying. Now picture this, 8 girls and a dying puppy in our yard. You can only imagine the “ohhhh’s” and the “what are we going to do’s” that were exchanged.  We wondered at what point would we come out to our yard and find this little thing dead. It was only a matter of day’s even hours. So of course the mother instinct kicks in all of us and we take on mother/veterinarian/savior role to save this dog. We tried feeding her bread, chicken, turkey, carrots, even Doritos, but she wasn’t interested. All she wanted was to die in peace. Well she picked the wrong yard to attempt to die in. 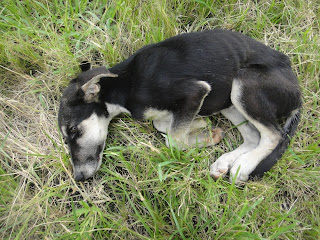 Thankfully another dog loving teacher came to the rescue and mentioned that the pharmacy has a shot that you give the dog and it kills amebas, fleas, ticks, worms, you name it, it kills it, and the kicker is that it only cost $1. You tell me what vet in the U.S. would give your dog a shot to kill all that for a dollar?!?
So as we waited for this shot to kick in, we named her Esperanza (which means hope in Spanish). It was either all uphill for this dog or she was a goner in 2 days max. But as her named proved right, we woke up to find her wagging her tail and ready to actually eat her first meal.
Esperanza has become the mascot of the Gringas. She follows us to and from school. She goes between the upstairs and downstairs, never wanting to miss out on anything. She even whimpers her heart out when we leave her at home to go to school. 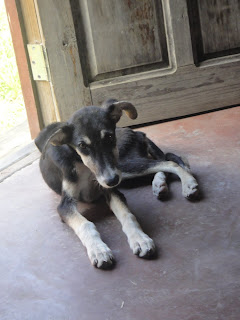 Here is Esperanza hanging out in my classroom.
Looks like we adopted a stray. Oops!!
Posted by Ms. Kate Seeley at 4:23 PM